"War is hell, Mr. Thornhill, even when it's a cold one." ~ The Professor, North By Northwest

Out of the aftermath of the Second World War came the Cold War between West and East, between NATO and the Warsaw Pact. The War Museum's next section starts to examine that with early causes and events, including the Berlin Airlift, which Canadians had a hand in. 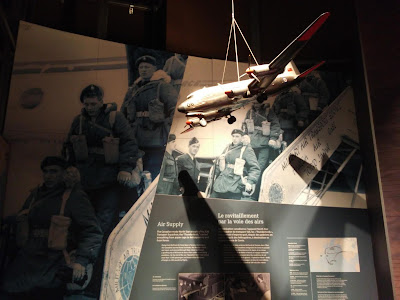 The Korean War also rose out of this period, and the Canadian military sent troops, sailors and airmen off to the other side of the world as part of the effort against North Korea and their Chinese benefactors. Not all of them made it out of North America- this panel shows the aftermath of a collision of two trains in November 1950 near Canoe River, BC. Gunners of a regiment bound for Korea were on board, and seventeen of them were killed. 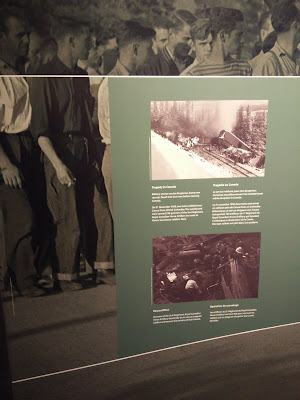 Ted Zuber had been too young for service in World War Two, but joined the Korean War as a soldier, enduring the harshness of the land and the ferocity of the opposition until wounded in combat. He had carried a sketchbook with him, and years later would start to paint his memories on canvas. The War Museum has several of his paintings from this war and Desert Storm in its collection. Zuber was commissioned by the military to create war art during that latter conflict, went to the Middle East with the troops, and is the only Canadian to receive medals for service in both the Korean and Persian Gulf Wars. A few days before Remembrance Day, the news came out that he had died after a bout of cancer.

This first one is a reproduction, as the original is presently out on loan, according to the accompanying display. Day Break- Gulf Of Korea depicts a Canadian destroyer off the North Korean shore, opening fire on enemy trains on the coastal railway. I chatted with an officer here about the cold look of the mountains. For whatever reason it's easy to not think of the Korean peninsula as cold and rugged, but that war proved otherwise. The Koreas can get brutally cold temperatures coming down from Siberia, and we talked about a novel we'd both read, The Frozen Hours, by Jeff Shaara, which tells the story of the Battle Of The Chosin Reservoir. 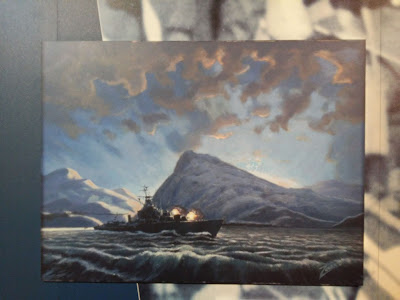 Other Zuber paintings are close by. First Kill- The Hook depicts a sniper and spotter position at the front. 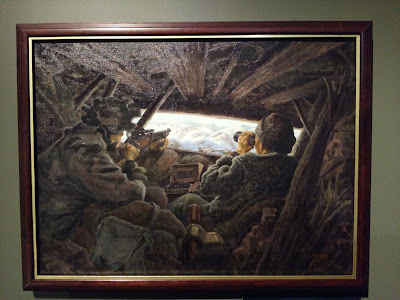 Holding At Kap'yong is another, depicting Canadian soldiers on the high ground in the midst of battle. An accompanying quote from 1999 by Donald Hibbs, a corporal at the time and a survivor of the fight, accompanies the painting. "I believed that night that maybe we weren't gonna be here tomorrow. I believed that we had to go down fighting. You know the old gung-ho, but I wasn't gung-ho: I was praying that I could survive the day." 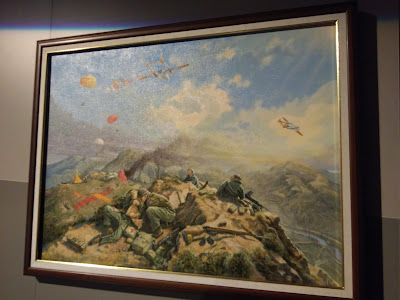 This panel featured a movie poster- I've heard of the movie but have never seen it. The panel beneath explains that it's based on the American Fred Demara, who posed as a Canadian medical officer during the Korean War using stolen documents. 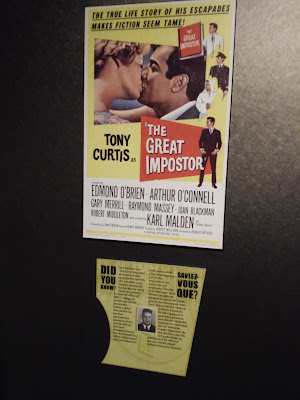 A spot here in the Cold War section that I always liked to stop at is this set up of a command centre, circa the 1970s or so. On two large screens, different scenarios of World War Three play out. 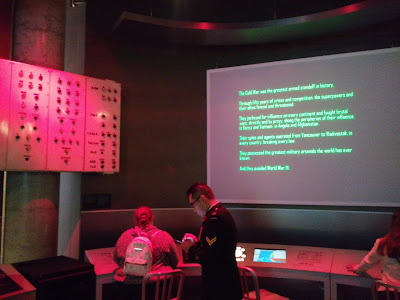 Equipment and vehicles, such as this tank, can be found here, representing both NATO and Warsaw Pact armaments. 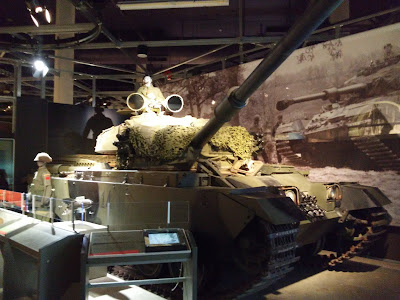 This is a full scale model of H.M.C.S. Bonaventure, a Canadian aircraft carrier that was in service with the navy from 1957-70. 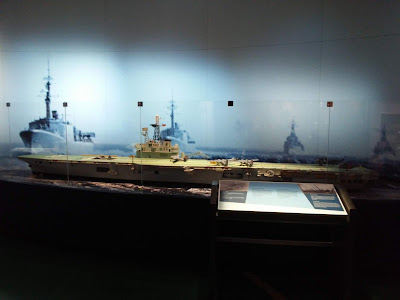 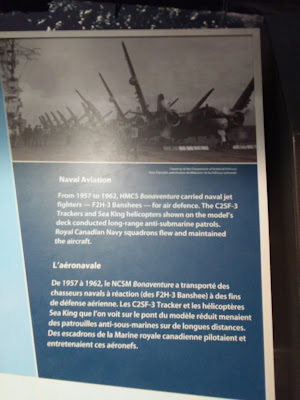 This panel examines a tragedy involving a Canadian destroyer in 1969- an explosion and fire on board the H.M.C.S. Kootenay that cost the lives of nine sailors but was contained through the work of the crew. 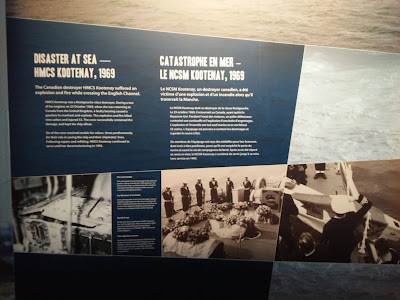 While this panel looks at our complicated relationship with our southern neighbours. 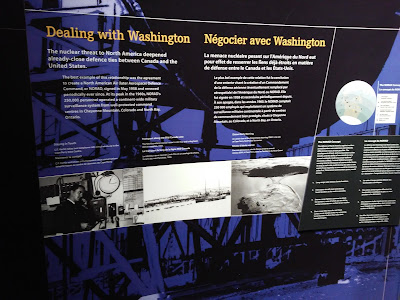 NORAD has been a joint air defense partnership with the Americans that sprang up out of the Cold War. This is the crest. 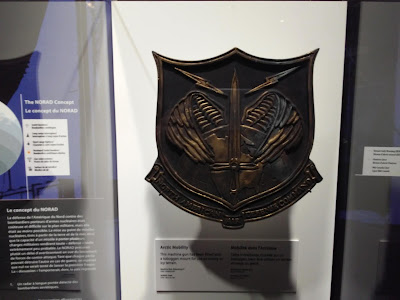 And today I leave off with what was beneath the crest, something for a northern environment. This machine gun has been fitted with a toboggan mount for towing behind a snowmobile in Arctic conditions. 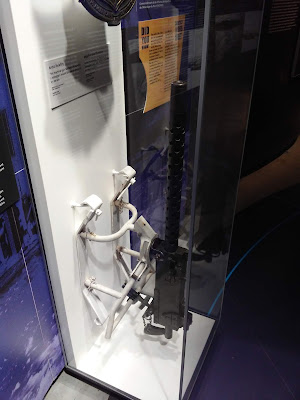