Dawn Of The Cold War 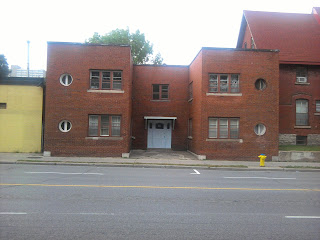 It doesn't look like much. It's an entirely unremarkable two story apartment building on Somerset, in the heart of the city, squeezed in between a beer store and an old house. I've passed it by countless times. Maybe four units total, from the looks of it. And yet this was a place where history was made, and where the Cold War drew some of its origins.

Igor Gouzenko was a cipher clerk in the Soviet Embassy here at the end of the Second World War. He lived in the upper right unit, with his wife and their children. His full story and more information can be found here through the CBC, and more details here. He took a hundred files out of the Embassy in September 1945, detailing Soviet espionage in the West, revelations that increased the growing tensions between the wartime Allies. The documentation and his inside knowledge proved to be damaging indeed.

Igor would live out the rest of his life here in Canada, under protection, writing a couple of books along the way. His memoirs ended up adapted into a movie starring Gene Tierney and Dana Andrews, called The Iron Curtain. For the rest of his life, fearing retaliation from the Soviets, on those rare occasions he would appear in public, for an interview with a reporter, for instance, he wore a hood or a mask. He died of natural causes in 1982.

Across the street is Dundonald Park, a small bit of greenspace in the heart of the city. In 2003, the city and the federal government put up two plaques commemorating Gouzenko. The first goes into greater detail. The second is the standard Canadian historical plaque. Though his wife had followed him to the grave, his children were still around that day for the unveiling.

Have you heard of Igor Gouzenko? 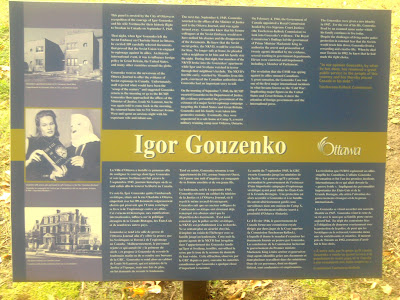 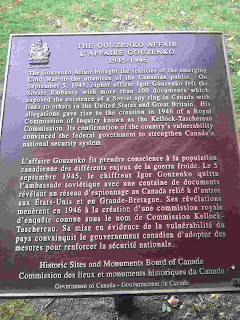 It might be a busy night for me, depending on if it's raining all day, as the forecasters suggest. Here in Ottawa we've got the second annual Nuit Blanche arts festival starting at sunset and going late, late, late into the night. If I'm taking it in, expect pictures soon!