At the top of Elgin, near Parliament Hill and the Chateau Laurier, stands sacred ground. The National War Memorial, a granite cenotaph also called The Response, is a national gathering point symbolizing the sacrifice of soldiers.

The memorial was unveiled in 1939 by King George VI, commemorating the serving men of the First World War. It has been extended to honour the veterans of the Second World War, the Korean War, and military operations since. Two allegorical angels representing peace and liberty stand at the top. Through the arch, twenty two over-sized men, women, and horse and artillery move through, representing the various services of the First World War. The Tomb Of The Unknown Soldier stands at the base of the memorial. 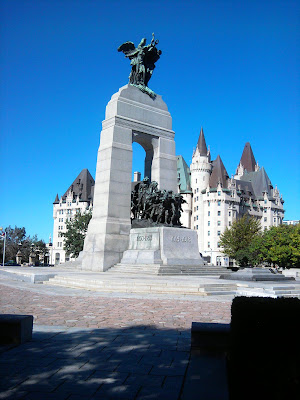 The memorial is often the site of ceremonies for anniversaries of battles, where wreaths are laid. And frequently when foreign leaders pay a visit here, they place a wreath at the memorial. During the summer, members of the armed forces stand at post before it through the day.

I have photographed this place in all seasons and times of the day. It is a monument that resonates strongly with me, so you'll see it from time to time here.

Posted by William Kendall at 1:32 AM