I started out Nuit Blanche at Arts Court, a maze of galleries, performance space, and studios in a former courthouse (and neglected to take shots inside). From there I went on through a couple of more studios over in the Byward Market before spending time in a cafe close to my destination, where the night's activities were based on a human library. Twenty or so individuals of various creative fields were sitting at tables for bookings of twenty minutes to a half hour, and I sat down and chatted with a graphic illustrator, a romance novelist, and two members of a dance company that consist of able bodied dancers and those who use wheelchairs. It's a fascinating experience, chatting with strangers who are of a creative streak, getting to know them, to the point where you feel a rapport and a kinship with them.

From there it was over to the nearby St. Brigid's Centre For The Arts. It was a Catholic church, with a rich history for the local Irish community. St. Brigid's was deconsecrated when the archdiocese decided to shut down the church several years ago (to the dismay of the parish). The church was bought and preserved, however, by a local group of Irish businessmen, and put to good use, turned into an arts centre and cultural home for the Irish community of the Ottawa Valley. It's a very fitting use for the place. The religious decorations remain in place throughout; for instance, you can see the cross of Christ in the second of these pictures on a pillar by the stage. The stations of the cross are still to be found where they were always mounted on the walls, the windows and art work are preserved, and this beautiful old church remains a vital presence in the community. 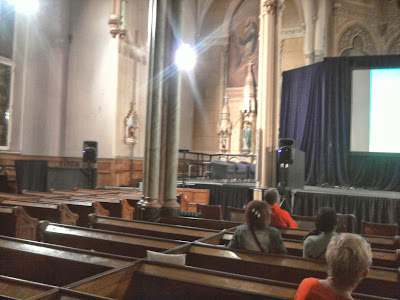 For Nuit Blanche, the Ottawa animation festival was in full swing, with animated images projected onto the screen set up on stage. There were people going in and out while I was in, as well as downstairs, where the old basement has been transformed into arts space, and where several sculptures were on display. The church was a busy place as I went through, testing the night features of the mobile for the first time. 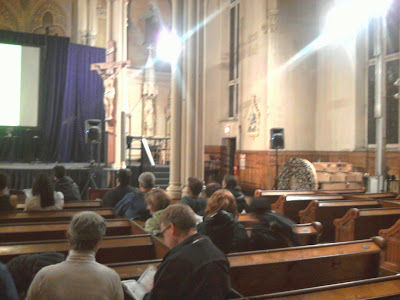 I love the vaulted space of the sanctuary, and I'm glad the church is still seeing good use. As a cultural centre, it remains as the beating heart of the community. You'll see more of it in these blogs from time to time. 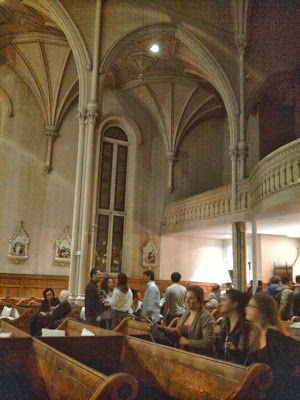 Posted by William Kendall at 12:11 AM