Here, from a lovely vantage point on Plaza Bridge, we have the Ottawa Locks, the end or the beginning of the Rideau Canal, depending on if you're coming or going. 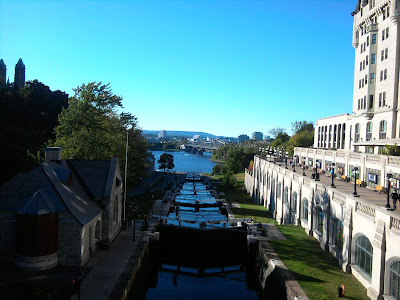 It is a lovely spot to stroll down to the Ottawa River below. On a weekend the area is popular for wedding photography, so it's typical to see parties strolling about under the direction of a photographer this time of year. I'll keep my eyes out when I'm down there on a weekend.

There are eight locks in total for boats to navigate to or from the river, onto the Canal. UNESCO designated the Rideau Canal a World Heritage Site several years ago, and it dates back to the 1820s, designed and overseen by the military engineer Colonel John By as an alternative route away from the border with the Americans. It follows the Rideau River for much of its length, forming a parallel waterway where needed, and eventually finds an outlet at Kingston, on Lake Ontario.

On the upper left, you can see portions of the East Block on Parliament Hill. Beside the Canal on the left is the lockmaster station, which dates back to the 1880s. Down closer to the river is the old Commissariat, a stone building that is the oldest in the city, the original working headquarters for the canal project and Colonel By. Today it serves as the Bytown Museum. Across the river is the city of Gatineau in Quebec, where we'll go to on a regular basis. And on the right, the terrace and building you see is the magnificent Chateau Laurier. The hotel celebrated its centennial last year (its owner happened to be on the Titanic on its one and only trip, went down with the ship and a tremendous amount of luxurious furnishings meant for the Chateau, and is reputed to still haunt the hotel that he never got the chance to properly open). You'll see the Chateau on a regular basis too.

Posted by William Kendall at 3:30 AM