Picking up where I left off yesterday with the Gallery exhibition, Claude Monet painted this oil on canvas work in 1865. The Chailly Road Through The Forest Of Fontainbleau shows a country scene in Chailly, where the artist stayed for several months that year. 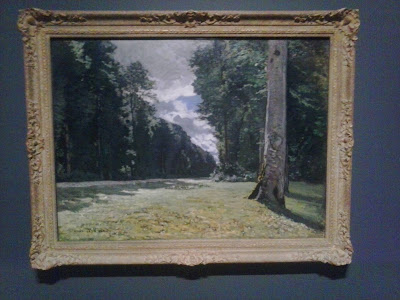 Monet returned to a favourite subject, the Normandy region, in this circa 1881 oil on canvas. The Cliffs  Near Sainte-Adresse, Overcast captures the wild coastline. 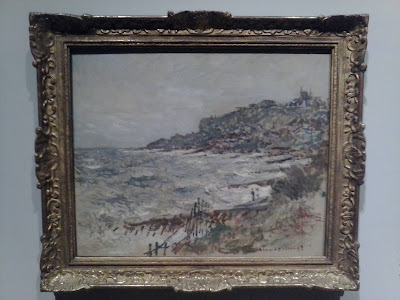 Waterloo Bridge, Overcast is a 1903 oil painting by Monet. Later in his career, the artist would paint a given subject repeatedly in different light conditions. Such is the case with this London bridge, which was the subject of some forty paintings over several years. The National Gallery has one of those in its collection, out on loan to another museum at the moment. 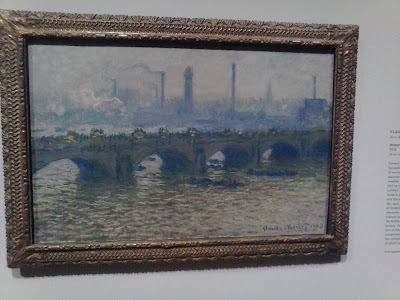 And here we have another Monet oil painting. Seascape, Le Havre is a dramatic painting dating around 1866, depicting the coastal waters in the area where he grew up. 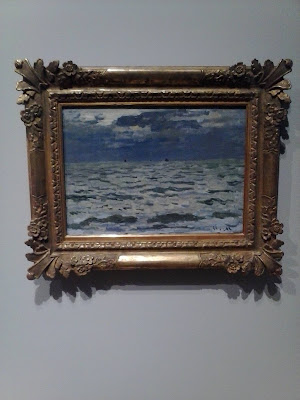 Moving on, this is a work by Camille Pissarro, an oil painting from 1898. Morning Sun In The Rue Saint-Honore, Place du Theatre Francais is one of fifteen paintings the artist did from his hotel room overlooking the view, in this case Paris in an autumn glow. 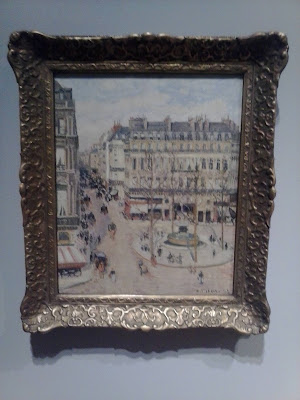 Pissarro spent time over the years in Pontoise, where he became friends with Cezanne and Gaugin. This oil painting dates to 1876 and uses the area as its subject, titled By St. Antony's Brook, The Hermitage, Pontoise. 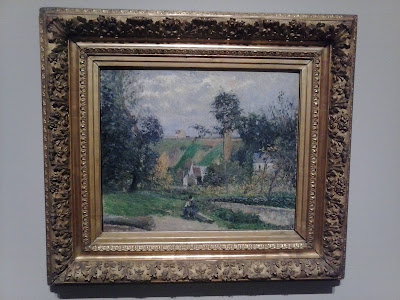 Pissarro was afflicted in 1888 with a chronic eye condition that required him to stay indoors for hours on end, and so he began to paint the countryside around his home in Eragny, working from his studio. This 1894 oil painting is titled Snowy Landscape, Eragny, Evening. It gives a view out from the second floor of his studio, and reflects his feeling of winter as "the most colourful season... that there is 'nothing colder than the summer sun at its height'." 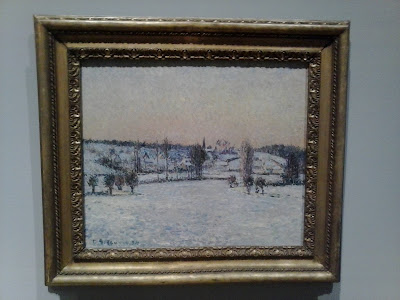 This is another oil painting from that period by Pissarro dating to 1897. A Corner In The Garden, Eragny (The Painter's Home) shows the gardens outside his home in summer. While his eye condition kept him indoors a lot, he could still look outside and take inspiration from what was before him, and so his property was a recurring theme in his work late in life. 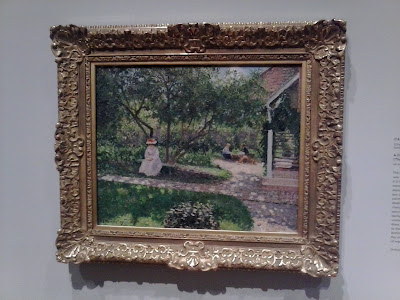 This 1894 oil painting by Pissarro is another instance of his property being central to his work at this stage of his life. Plum Trees In Blossom, Eragny gives us his property in spring. The barn one sees in the background is the building he converted into his studio upon moving to the area in 1884. Its distinctive outer staircase appears often in his late work. The plum tree at the heart of this work seems to be shimmering. 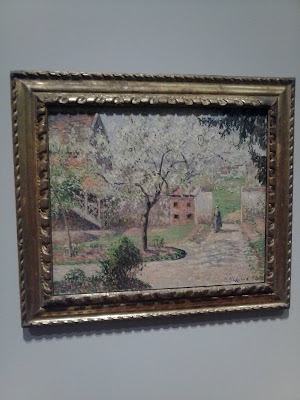 Edouard Manet painted this oil on canvas at some point from 1858-60. Woman With A Jug reflects the history of art, in which the motif of a woman pouring water from a jug was well established, but does so in a style typical of the 19th century. The model in this case was Suzanne Leenhof, later the artist's wife and a frequent subject for him. 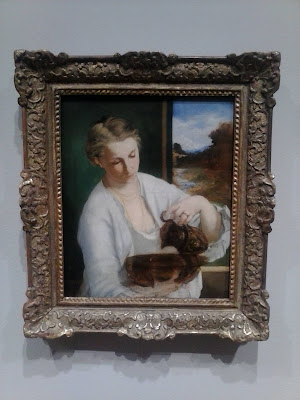 Eva Gonzales painted The Convalescent, Portrait Of A Woman In White around 1877-78. Her sister Jeanne, a frequent subject for the artist, is the subject here. 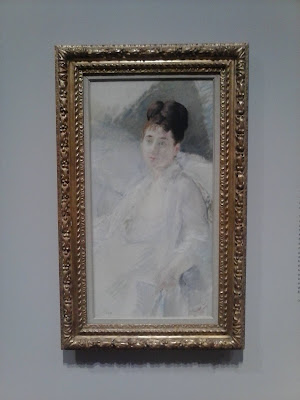 Today I finish off with this 1894 oil painting by Edgar Degas. Woman Arranging Her Hair exhibits some of the qualities of a pastel, which Degas had taken to primarily using starting in the 1880s. 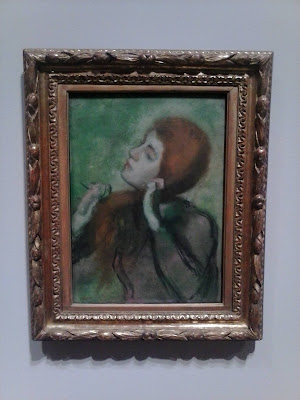