Impressionist Treasures: The Ordrupgaard Collection was the title of a temporary exhibit at the National Gallery of Canada this past summer. The Ordrupgaard is an acclaimed national museum in Denmark, a collection built up by the Danish businessman Wilhelm Hansen and his wife Henny during the early years of the 20th century. Named for the residence of the Hansens in Copenhagen, the collection and the property was bequeathed to Denmark after their deaths. The museum is undergoing a renovation project at the moment, and so the Ordrupgaard has sent portions of their collection on tour for the duration. Over seventy paintings from the collection formed this exhibit of works with an emphasis on the French Impressionists, who were particular favourites of the Hansens. Danish artists were also included in the exhibition. With the exception of one painting included in the exhibition from the National Gallery's own collection, everything else displayed was from the Ordrupgaard, at least that I noticed looking at the identification panels.

One of the first things one saw upon entry was a period photograph of the house on a large scale, and a quote from Wilhelm close by. 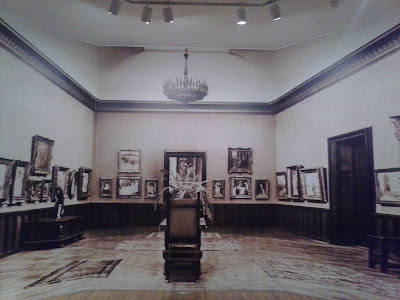 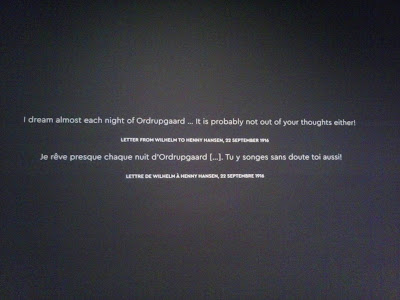 Jean-Auguste-Dominique Ingres painted Dante Offering The Divine Comedy To Homer. It is related to his monumental mural Apotheosis Of Homer which was originally a ceiling panel in the Louvre. Two dates, both marked in the accompanying panel date it to the 19th century- 1827 and 1864-65. I would assume that applies to the two works. It is an oil painting. 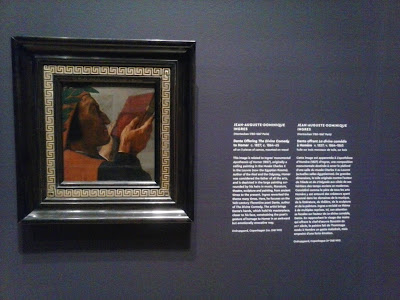 Eugene Delacroix painted this portrait in 1838. George Sand is one half of a double portrait showing the French writer who was a friend of Delacroix. The other half of the painting, now at the Louvre, is of the composer Frederic Chopin, who was her lover at the time. The reason for the division of the painting is unknown. 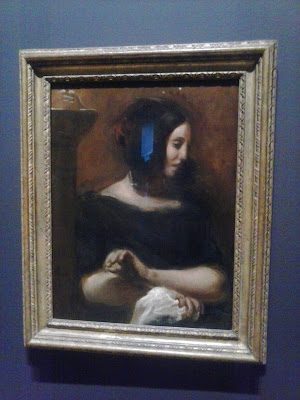 Delacroix also painted Ugolino And His Sons in 1860. It takes a sequence from Dante's Divine Comedy in depicting the fall from grace of Count Ugolino and his family. 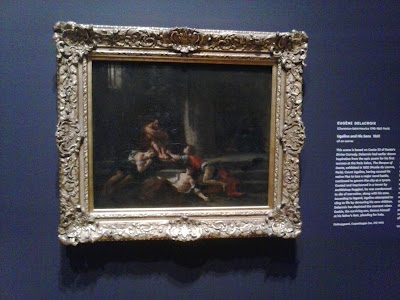 Gustave Courbet painted The Cliffs Near Etretat in 1869. This place along the Normandy coast was a favourite locale for the artist while staying in the area in August and September of that year. 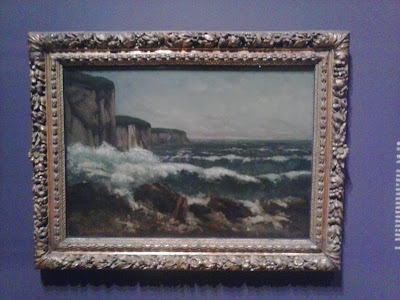 Courbet was also behind this painting done in 1866. The Ruse, Roe Deer Hunting Episode (Franche-Comte) is an oil canvas showing the social activity of the hunt, a stark contrast to the expectations of the Exposition Universelle of 1867 that would have favoured religious or historical material. 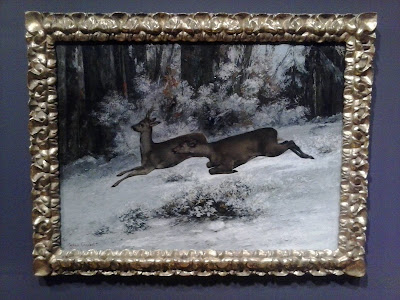 Courbet painted this oil painting in 1861. The Wiremakers' Workshops On The River Loue, Near Ornans depicts the distinctive countryside where he had come from in Franche-Comte. 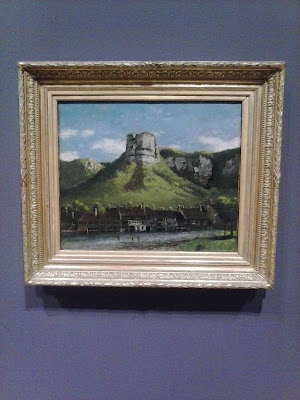 Seascape, Overcast is the title of this 1874 oil painting by Charles-Francois Daubigny. Visits to Normandy had a strong influence on the artist. 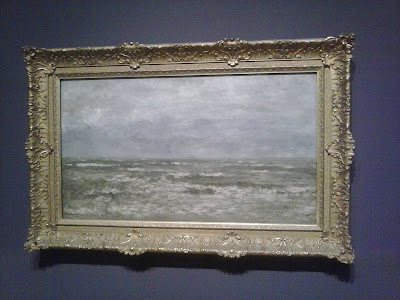 Camile Corot painted Young Italian Woman Seated Near A Lake at some point between 1850-55. 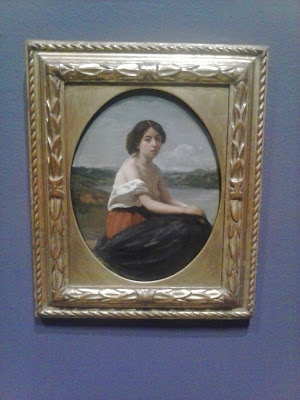 Corot painted this oil canvas around the same time. Dancing Nymphs takes mythology for inspiration. It is similar to another work by the artist at the Musee d'Orsay. Four nymphs dance in a circle around a drunken man lying on the ground. Today I finish with another Corot. Hamlet And The Gravedigger was done circa 1870-75 and depicts the scene in Act V of the play in which the Danish prince comes across the freshly reopened tomb of the court jester Yorick, who he'd known as a child. 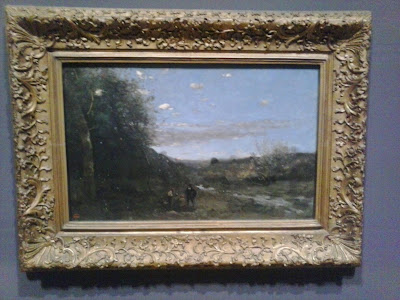