Today I am marking an anniversary in Canadian history. I'm starting with a photograph of the Library of Parliament, taken at sunset one day in February while on Parliament Hill. The statue at the left is that of one of our Fathers of Confederation, the esteemed speaker and writer, Thomas D'Arcy McGee. One of our finest and most eloquent founders, McGee had been a radical in Ireland in his younger days, ultimately becoming a journalist and writer in Canada. He acquired a law degree, moved into politics as a Member of Parliament from Montreal, and became a close friend to John A. Macdonald, who would wind up as our first Prime Minister. McGee changed his views on Irish nationalism over time, going from a radical to a firm defender of constitutional monarchy, gaining the animosity of those he once stood with in the process. Today marks the 150th anniversary of the night of his assassination. Have a look at links on McGee and the events of that night. 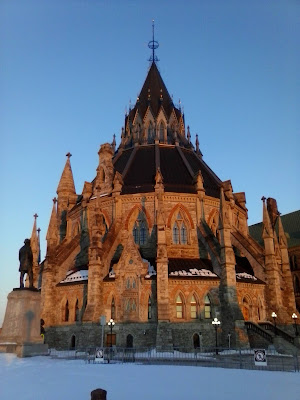 I came back one day in March, late in the afternoon. 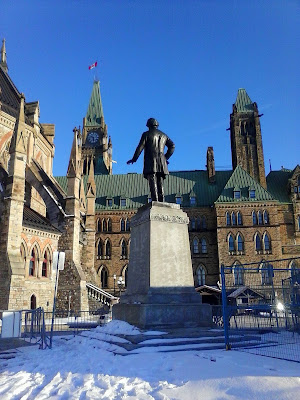 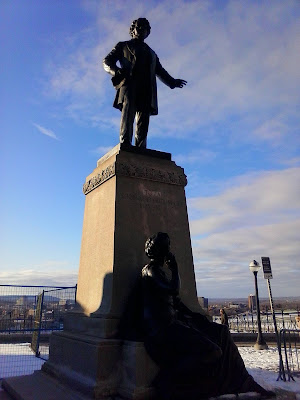 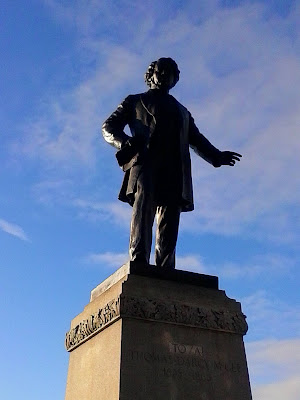 McGee left Parliament after debates in the House of Commons that night, bound for the boarding house where he resided, which was on Sparks Street, a block south of Parliament Hill. Today on Sparks Street, this modern building bears his name, and houses several federal courts, fitting given his legal credentials. 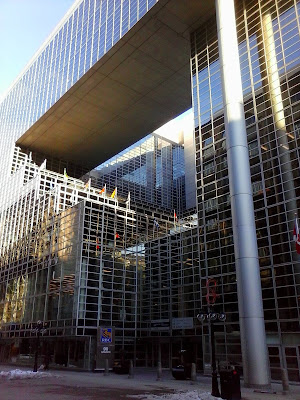 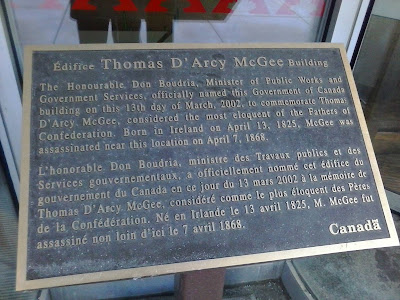 East along Sparks, where it meets Elgin Street, a pub also bears his name. D'Arcy McGee's occupies the ground floor of this building, which happens to be part of the trio of buildings collectively called The Chambers. The Chateau Laurier is reflected in its windows. 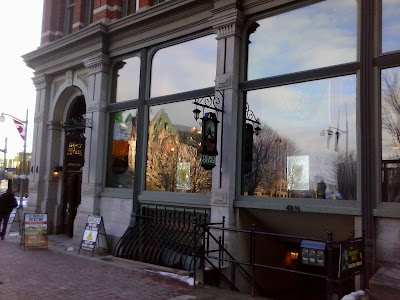 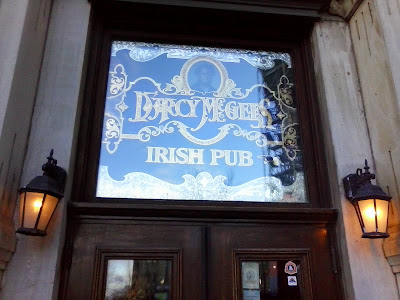 Heading back west along Sparks takes us to the scene of the crime. Where a Subway shop stands today, in McGee's time, this was the site of the boarding house that served as his in-town residence. Walking home late in the evening, he was just at the front door when a gunman shot him in the back of the head, killing him instantly. His shift in views had made him enemies among the Irish nationalist cause and the Fenian movement in the United States. A plaque can be found alongside the current day building explaining the significance of the location. Some years ago, a writer, Gordon Henderson, wrote a book, Man In The Shadows, that wove fictional characters with fact, recounting the events of the assassination and trial in a novel form. 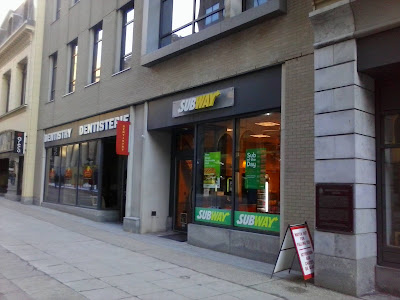 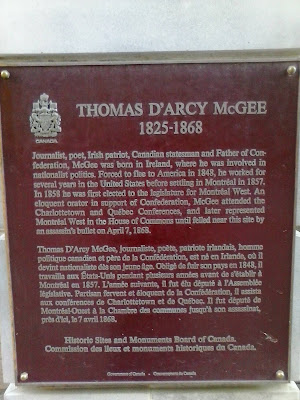 Patrick James Whelan, an Irish immigrant, local tailor, and a Fenian sympathizer, was tried and convicted of the assassination, though there is good cause to doubt his role in the matter. He was hanged publicly here at the old Carleton County Gaol, which today serves as a youth hostel. 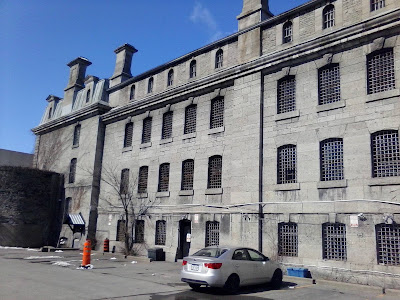 The hostel is linked to the building at its left, which was once a courthouse. Today it houses Arts Court, a hub for studios, workshops, and other artistic ventures. Arts Court has been expanding in the last few years in partnership with the University of Ottawa and a developer. A complex is in its final stages taking up what had been the empty back lot behind these two structures. A condo tower takes up part of the project, while Arts Court and the university's theatre program will have plenty of extra space for their operations here. Whelan was buried on the grounds after his hanging, and whatever's left of him is still here, though some years ago a box of earth was taken from the site, consecrated in a Catholic ceremony, and buried with Whelan's wife in a cemetery in Montreal. That same cemetery, Notre Dame des Neiges, is the final resting place of Thomas D'Arcy McGee. 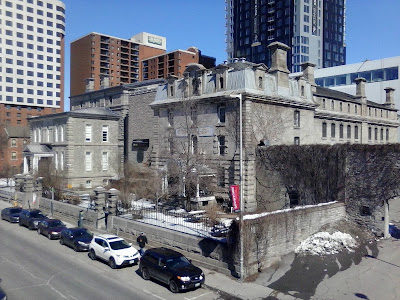