A reminder to members of City Daily Photo: the theme day for May is Let's Eat. And have a peek at my writer's blog for today's post, as it's something of a preview for a series I'll have here in early May.

Today I'm starting with one of the passages within the world art section of the National Gallery. 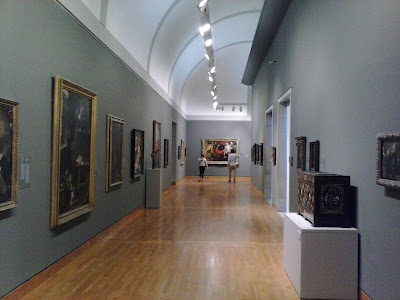 Pan & Syrinx is an oil painting by the French artist Jean-Francois de Troy, dating to 1833. It draws on the Greek mythological tale of the nature god Pan and the nymph Syrinx, who rejected his advances and found safety with her river god father, who transformed her into marsh reeds to protect her from Pan. 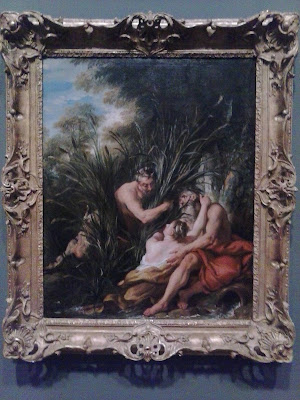 Greek mythology (with a Roman name) also forms the subject for this 1717 oil painting, Venus Presenting Arms To Aeneas. Jean Restout the Younger takes a passage from Virgil's Aeneid in which the goddess of love gives arms to her mortal Trojan son Aeneas. 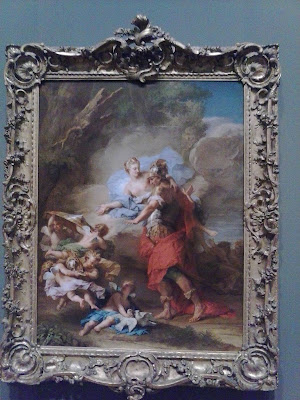 Vulcan At His Forge is a 1750 oil painting by the Italian artist Pompeo Batoni depicting the blacksmith god of Olympus (Hephaestus in the original Greek) and husband of the goddess of love. In Virgil's tale, Venus receives the arms for Aeneas from Vulcan. 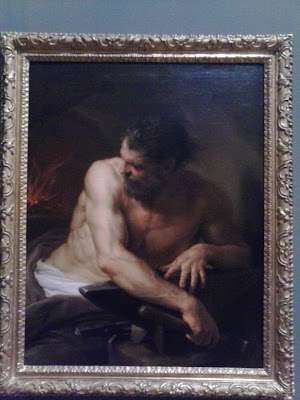 The above painting is just behind the sculpture in this shot. I always seem to get a shot of Antonio Canova's marble Dancer when I'm here. 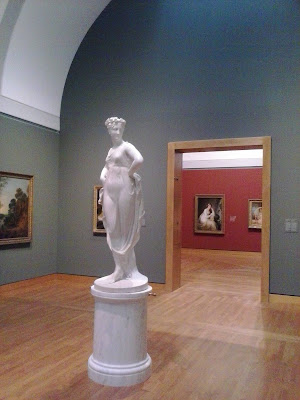 I photographed these three paintings in the room beyond. I've featured each before. On the left is Countess Tolstoya, a 1796 oil painting by the French portrait artist Elizabeth Louise Vigee LeBrun. This is a recent acquisition for the Gallery, a legacy of the major retrospective that was held here on Vigee LeBrun in 2016. In the middle is Bacchus And Ariadne, an oil painting done circa 1821 by the French artist Antoine-Jean Gros, and which depicts part of the myth of the mortal hero Theseus, who has left his intended bride Ariadne behind on Naxos after being warned that the god of wine has chosen her for his bride. The Olympian is comforting his future bride. On the right is the portrait Madame Erneste Bioche de Misery (hence my title for this post) 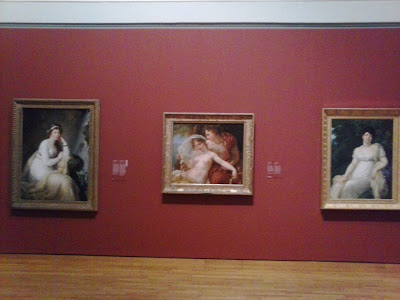 This is the work of Anne-Louis Girodet, a French artist, who painted this work in 1807. Madame de Misery (what a name) was the wife of the mayor of Saint Lye, and for this portrait is dressed in Empire style. This particular painting you might remember- it was on display in a companion exhibit, The White Dress, for the Vigee LeBrun retrospective. 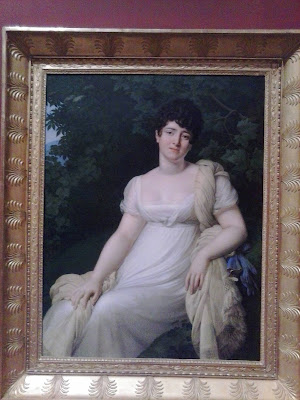 This large oil painting is one I've shown you before, but I decided to frame it at a distance through the doorway. French artist Charles Meynier painted Wisdom Defending Youth From The Arrows Of Love in 1810. It is an allegorical painting with mythological influences that resonated with the idea of Napoleonic duty to country. 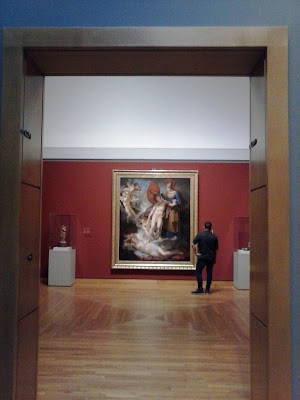