I am starting out my series on Doors Open today- with two buildings that weren't part of the festivities, but which I would not have seen if I hadn't been in the area. My first intended stop of the weekend was the Algerian embassy in Sandy Hill, which I'll show you tomorrow. I was a bit early, stopped in the nearby Strathcona Park to take some pics (to be shown sometime later this summer when I don't have this many pics waiting to be sorted), and then went up to my destination. This is the Russian embassy, which is very close to the Algerian embassy- you can see this monstrosity from the latter's backyard. The building is even more of a fortress than the American embassy, and practically screams "go away, screw you, and rot in hell." No doubt a gigantic portrait of Darth Vladimir is inside. Which reminds me- I don't understand why our Prime Minister dislikes him so much; they're both megalomaniacal dark lords of the Sith.

I spoke with a volunteer at another site the next day, and she mentioned that the building dates back to when there was still a Soviet Union, and that the RCMP owned all the houses across the street, just to keep an eye on them. 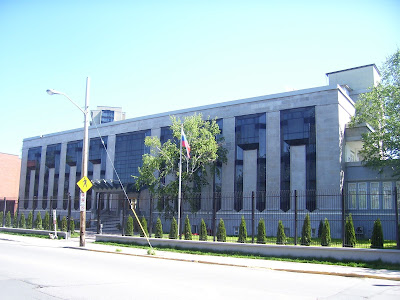 A short way up the street- and a complete contrast- is Stadacona Hall, which has a historical plaque along one of the gates. Sir John A. Macdonald seemed to be following me throughout the weekend as I visited places. After World War Two the mansion and property was the residence of the Belgian ambassador for many years. Today it serves as the high commission for the nation of Brunei Darussalam. A high commission and high commissioners are the same things as embassies and ambassadors, by the way- they are called that if a Commonwealth country has a diplomatic mission in another Commonwealth country. 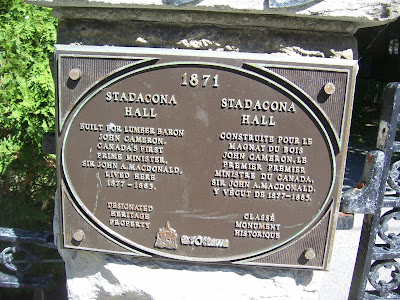 This view of the mansion shows a vast difference from the Russian embassy nearby- warm, inviting, and dignified. I will have to photograph it in other seasons. 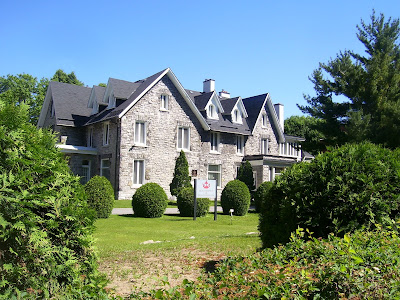