The second floor of the Bytown Museum includes some space for temporary exhibits. At present, that exhibit is titled Through The Eyes Of, and it examines various points of view from the city's earliest days to the present. Women are represented in a number of artifacts and display panels; this particular one features items from the era 1890-1930. 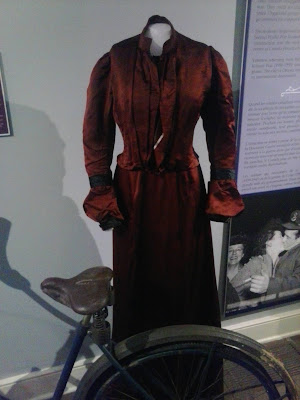 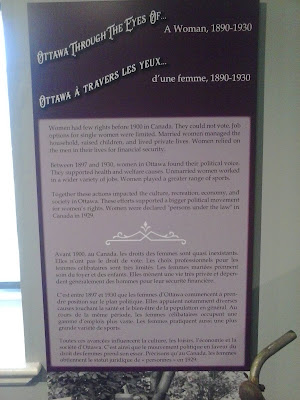 The child's point of view also gets a display case with a number of toys. The Legos bring back memories. I had no idea that Dennis the Menace had a toy line at some point. 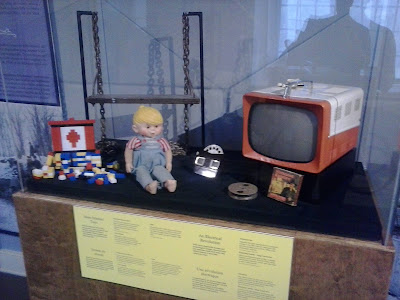 The current day perspective is best seen in this display case- items of an immigrant. The guides and translation dictionary you'd expect to see, but the other items, on loan, are from a woman who immigrated in the 1990s from Africa, and took some reminders of where she came from. The cloth is kikoy cloth, handwoven cotton that is common in Kenya and Tanzania. The jewelry is of the Maasai culture. 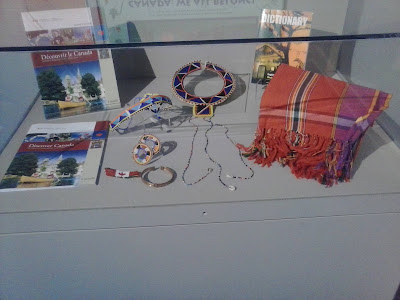 The Museum's permanent collection concentrates on an era starting with the building of the Canal and leading to the conclusion of the First World War. This display area features items related to Colonel By- the bust and sketch of him (though in fact the only lifetime depictions of him were silhouettes he sat for, and the artistic likenesses of the man are based on physical descriptions). The chest belonged to him as well. 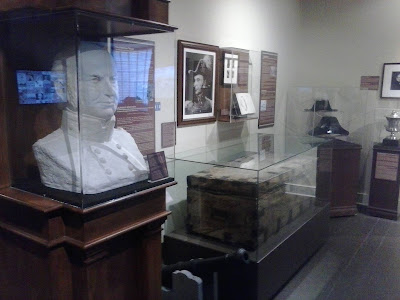 Tools and equipment related to the building of the Canal can be found here. Contractors supplied some tools, but tradesmen of the time often brought their own tools along. Thousands of men came to work on the Canal, bringing families into the region. Many of them stayed on and settled in the Ottawa Valley, and the town that grew up around the Canal's starting point was initially called Bytown. 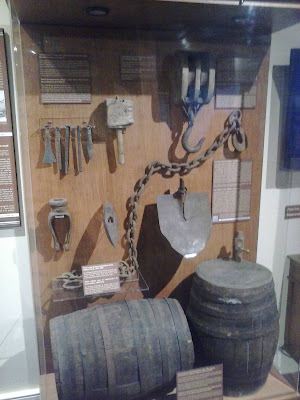 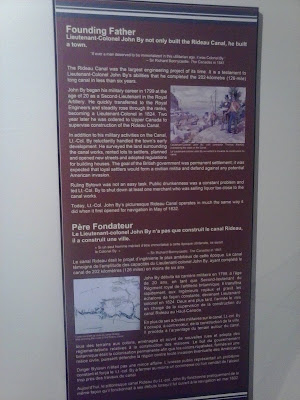 The uniform and some of the other elements in this display case belonged to Joseph Coombs, born in Wexford, Ireland in 1789. He enlisted with the Royal Sappers and Miners, saw action while attached to the Prussian Army during the Napoleonic Wars, and settled in Bytown with his family when the Canal was completed and his military career was concluded. He distinguished himself in the community as a private citizen, businessman, and organizer of the first fire company, and today is buried in Beechwood Cemetery. Bytown had a rough reputation early on as a lumber town, something it would retain when the name was changed by mid-century. Some of the era's history shows up here in various display cases. The portrait on the wall is that of J.R. Booth, the distinguished timber baron whose footprints still have left their mark in the city. The table is a one of a kind, topped with glass. Built in 1874 by James Hannum, a manager at the Eddy lumber complex, it consists of ten thousand pieces of inlaid wood, depicting the grounds of the company business and its surroundings in what was then downtown Hull (today the core of the city of Gatineau). It was exhibited at the World's Fair in Philadelphia in 1876. 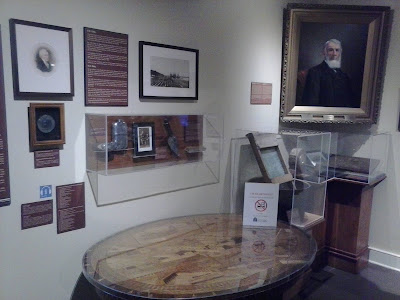 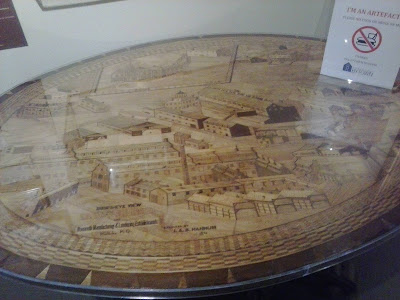 Another display case features items related to the timber era- spiked caulk boots, a Bible, and a cloth sash typical of French speaking peoples in the country. The larger than life story of lumberman Joseph Montferrand, a legend in the Ottawa Valley, accompanies the display. 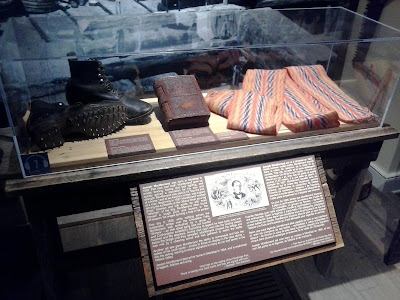 This display case tells the story of the Sisters of Charity, the Grey Nuns, who came up to Ottawa in the 1840s, led by Sister Elisabeth Bruyere, establishing local institutions, including a hospital that still bears her name, and facing the typhus outbreak of 1847 with exceptional courage. 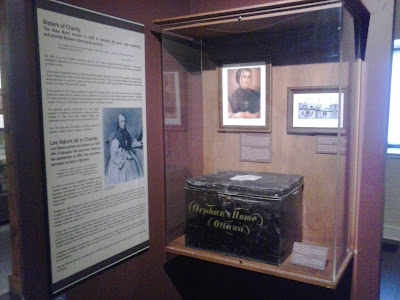 Being a rough and tumble lumber town for particularly the first decades of its existence, Bytown had a reputation as a violent, largely lawless place with a lot of drinking and bad behaviour. That would change when the town ended up being designated as a colonial capital by Queen Victoria, as well as renamed. Items of that early era are found with panels in a couple of display cases near the staircase heading to the third floor. 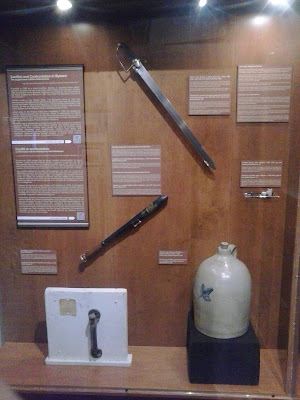 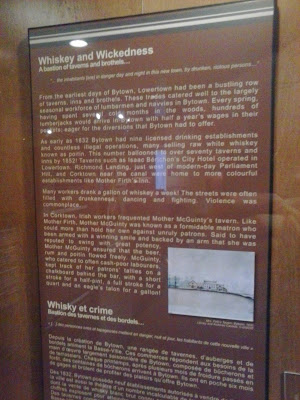