Every once in awhile, an artist captures the essence of the subject on canvas or in sculpture. Such is the case here, with a sculpture outside the National Arts Centre. Oscar Peterson played with the legends of jazz, and was a legend in his own right, composing music, touring the world until the last year of his life. Home was always in Canada though. 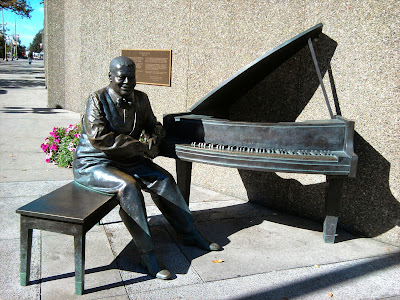 I never got the chance to see him in concert, but I have a number of  his albums, and he's the best jazz musician this country has ever produced. I'd even say the greatest pianist we've ever given the world, though Glenn Gould afficianados will disagree. He played in the NAC from time to time since its opening, and it's fitting that the sculpture is here. It looks as though he's just finished a set at the piano, and is taking in the applause of the audience. The bench makes for a good photo-op, since people can sit right beside the slightly larger than life sculpture of the great man. 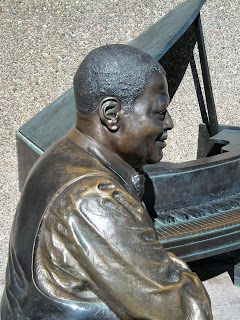 There are speakers set above the sculpture, playing Peterson recordings through the day and into the night. The sculpture was unveiled by the Queen during her last visit in 2010, and has been a popular place to stop ever since. I like the attention to detail in the sculpture, from the clothing to the expression on his face. It really shows the spirit of the man himself. 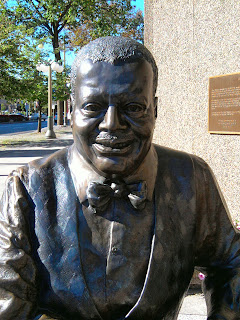