On the first day of the month, photobloggers from around the world participate in a theme for the day. This month the theme is Heights. You can find other participating blogs through the City Daily Photo Theme link here.

This was an easy one for me; I took the lift up to the observation deck of the Peace Tower on Parliament Hill, looking down onto the wide front lawn, the Centennial Flame far below, and downtown Ottawa. 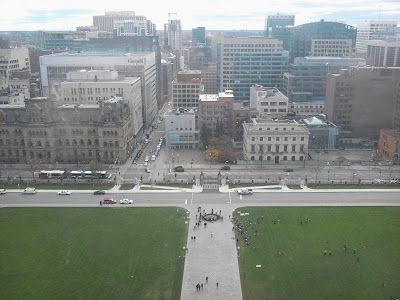 The Tower rises to a height of ninety two metres (300 feet for you Yanks); the observation deck is beneath the clock itself. You get a splendid view of the city, the Ottawa River, and Gatineau over on the Quebec side of the river. Just below the deck, on all four corners, gargoyles are positioned; this is typical of the stonework throughout the Parliament Buildings, where one can easily find intricate carvings. There's one such gargoyle below at the lower left, looking out towards the West Block. 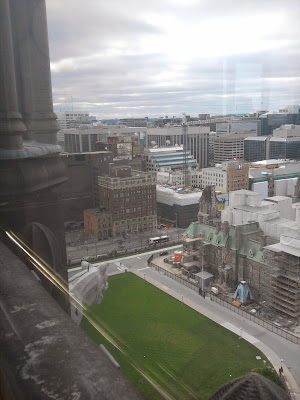 There has been a lot of ongoing restoration and construction going on around Parliament Hill these days; it's a long process, and much of the work being done at present is on the West Block. From above, you really get a sense of the scale of the work, as well as on other buildings across Wellington Street, which will be housing displaced workers for a few years. 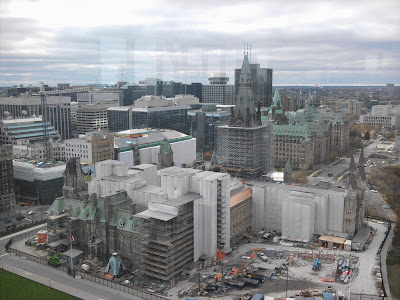 This small island is in the middle of the Ottawa River, and I wanted a closeup on it from up high. It's only inhabited by birds, and a few scrubs and brushes. If we have a serious winter coming up (fingers crossed), that whole island, except for the scrubs, will be under water during the spring thaw. 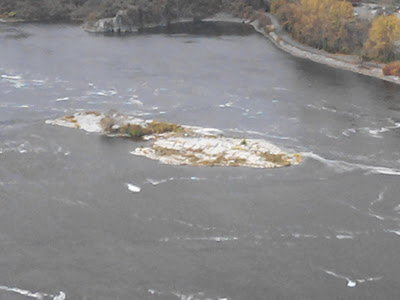 Cutting back to a wider view west of the Ottawa River, which carves a path between Ontario and Quebec. The West Block and the Supreme Court beyond it tower over the heights rising up from the river below. The river will freeze over in the winter- aside from some fast flowing currents coming from the Chaudiere Falls. I will have more views from the Tower tomorrow. 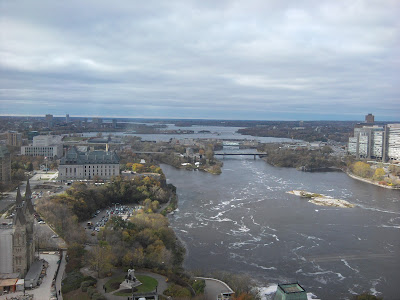