The Guns Of War

The American Revolution certainly had its influence on what was to become Canada. Loyalists came up from the former colonies after the war into what had remained British North America, starting a new life. Yet during the war itself, Canada was a battleground for Continental forces. Quebec City was under siege, part of a campaign by American officers to take the city and the St. Lawrence in 1775. Richard Montgomery, one of the rebel commanders, was killed during the battle. You may have heard of one of the other rebel generals, a temperamental fellow named Benedict Arnold.

Below is a model of a street scene in Quebec City during the campaign, with British regulars, local militia, and American troops engaged in battle. 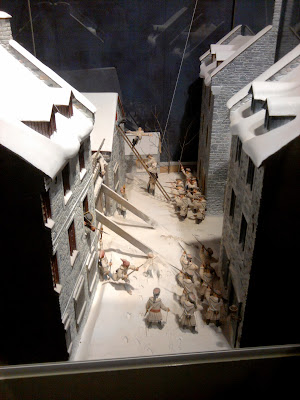 Weapons are displayed throughout the museum as we travel forward through time. In this portion of the museum, focusing on the Revolution and the War of  1812, these muskets, pistols, swords, and other items are safely behind glass, a display of the technology of the time. 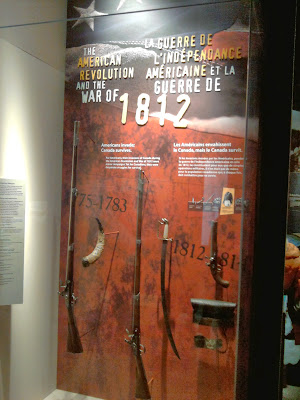 This is one of the key items in the museum's collection. British General Isaac Brock was killed leading forces at the pivotal Battle of Queenston Heights during the War of 1812. This is his uniform jacket. If you look closely, you can see a black hole on the chest, right below the downturned collar. That's where the fatal shot struck him. 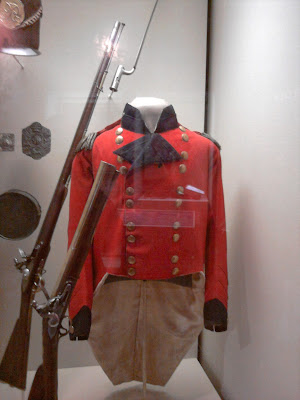 Moving forward to the end of the 19th Century, we have this cannon, an artillery piece from the South African War, in which Canadian troops went overseas alongside the British, fighting Boer forces in a place far from home. 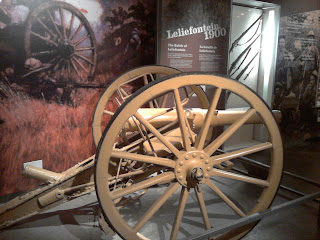