The War Museum houses a large collection of art. Some of the artists use the horrors of war as their subject. Others deal with the life of a soldier during downtime. And others depict armies simply on the move, or navies, as the case is in this first picture, which depicts Canadian ships en route to Europe at the outset of World War One. Still other art can be found in a selection of airplane fuselages painted with various images, some of which would have made a pilot's mother blush and wag her finger at her son. 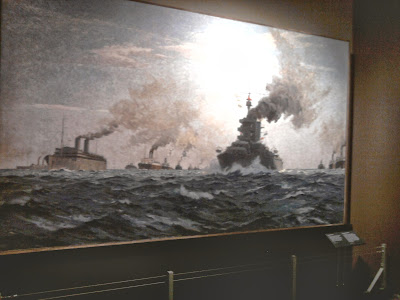 This second one, beyond the artillery, depicts a moment at the Second Battle of Ypres, in Belgium, in 1915, the first time the Germans used poison gas on a large scale against Allied forces. The cannon itself, as mentioned on an accompanying panel, was typical of the technology of the time. 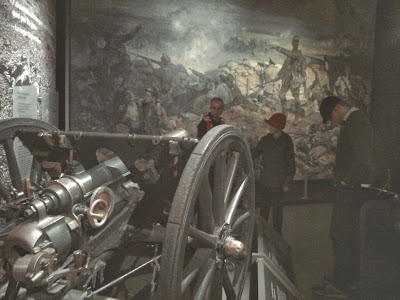 A portion of the World War One section deals with propaganda of the time. Examples are given, such as the death of British nurse Edith Cavell and the response to the sinking of the Lusitania; this part of the museum explores how propaganda played a role in carrying on the war. This sculpture below is drawn out of one such example. There's a story that could never be proven that a Canadian soldier was crucified on a barn door by Germans. The artist sculpted this as a response. Whether or not it's mere rumor, the sculpture itself is harrowing. By the way, that's me reflected in the glass. 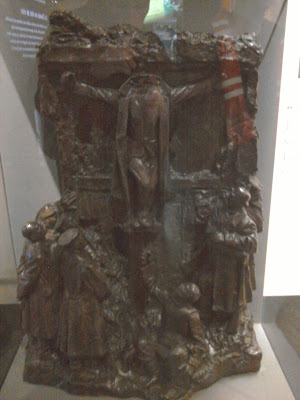 One of the most poignant spots in the museum is one that I stop at each time I visit. There's a large wall in the midst of this section filled with items from the soldier's life in the trenches, common every day objects. These two artifacts belonged to a soldier who died on the Western Front. The bear was a gift from his daughter that he carried with him. The letter was from his son. Both were returned to his widow and children after his death, and the family donated them to the museum. It is a reminder, I think, that every soldier has loved ones back home, waiting for them, and the human cost of a soldier's death. 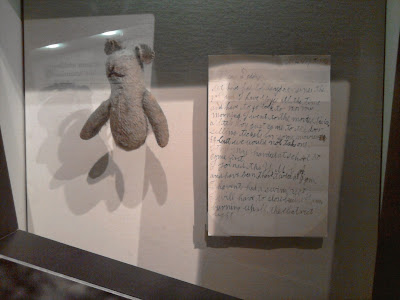