Today is Remembrance Day in Canada, Veteran's Day and Armistice Day elsewhere; it is the commemoration of the end of the First World War on November 11th, 1918, nearly a century ago now, as well as a day to honour veterans and war dead in many countries around the world. I will be at the services at the War Memorial today, and dropping in at our War Museum as well, so you can expect pics to come. For today and tomorrow, I'll be showing you the interior of the Memorial Chamber in the Peace Tower on Parliament Hill. If you're so inclined, check my writer's blog for a post on the Somme, and a guest post I wrote on the soldier and poet John McCrae. 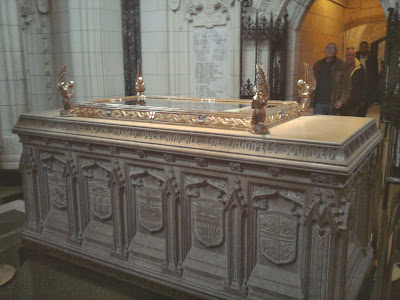 When Centre Block was rebuilt, the Peace Tower was erected in memory of the dead of the First World War. The Memorial Chamber was integral to the Tower, a commemoration of the many dead through the War, and is now dedicated to all who have died in military service in our country's history. The room is a quiet, reflective space, with books listing the dead of World War One, World War Two, Korea, the Merchant Navy, and other conflicts and operations before and since those wars. Each of these books are placed in elaborate cases, the pages turned once a day,  for something like the above case, which houses the book listing the Canadian dead of the First World War.

Around the walls of the room, panels are carved with the years of conflicts,  theatres of war, and specific battles. There are other panels that include scripture or poetry carved into the stone. 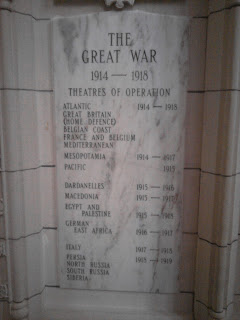 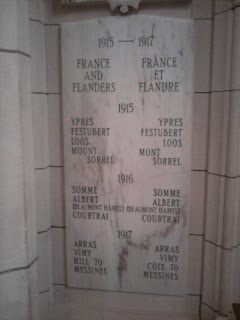 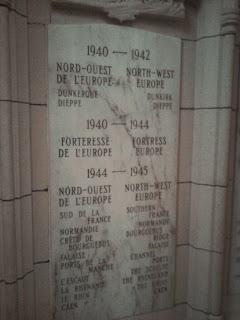 The books are all under glass, and the names of the past reach out to us across time. They were young men, serving their king and country in some far away place, and they died a long way from home. 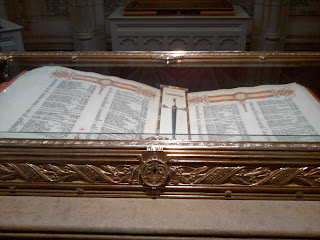 This closeup of the book for the Great War, as it was called, vexed me, because I was trying not to get the reflection of a stained glass window above. Actually, it works. 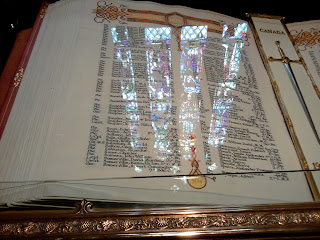