A Work In Progress

Lansdowne Park is a forty acre space along the Rideau Canal at the south end of the Glebe. It's a forty minute stroll down from Parliament Hill, but it's the scene of some heavy construction these days. The city pretty much handed the facilities over to a sporting and entertainment group, who are busy building facilities for retail, condos, and offices, not to mention refurbishing the Civic Centre and completely rebuilding the football stadium. For the record, I hate football. I don't care for the decisions that were made; it seemed the city just gleefully let these people do whatever they want, and now it's too late to turn back.  They claim they'll be incorporating a lot of parkland and greenspace on the east side, but I doubt it. I'm just waiting for the day that the announcement is made that the parkland will just have to be forgotten, that the project can't make it viable.

I lived across the Canal from Lansdowne until recently, and the construction noise wrecked havoc with my sleep for months on end. I feel sorry for those living even closer, since the construction companies work at any hour of the day, causing endless amounts of upheaval and frustration. It doesn't help that the city seems to disregard any complaints from local residents.

All so a handful of real estate developers can make a ton of money for the next thirty years, while the city assumes the risk. Politicians. Idiots at all three levels of government.

Below, you see the Aberdeen Pavilion at the heart of the shot. That dates back to the earliest days of the park, a large building that's grand to get up close to. OSEG, the conglomerate behind this, promised sight lines to the pavilion would be preserved. To me, the pavilion is getting crowded. 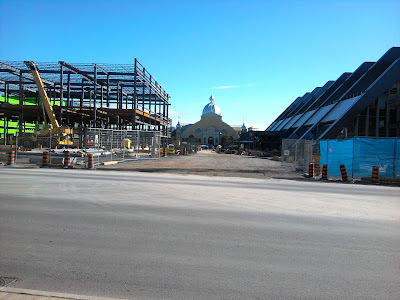 And here we have the football stadium side of things. All for a pointless game that gets played once a week. Maybe twice. In a city that's moved past its football days and saw two professional teams close up shop. By the way, the name these people came up for the next incarnation of the team? The Ottawa Redblacks. 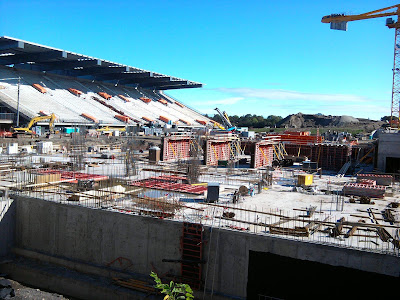 Here we see the stadium from the Bank Street Bridge, both sides of the stands. The north side is still from the original stadium, though it's undergoing serious renovations. The south side stands are a new building entirely. I'm not optimistic, all told. I'm still convinced the entire thing is going to be a scar and a blight on the city. The local government had a chance with this place to do something special. Instead they let a handful of developers run wild. 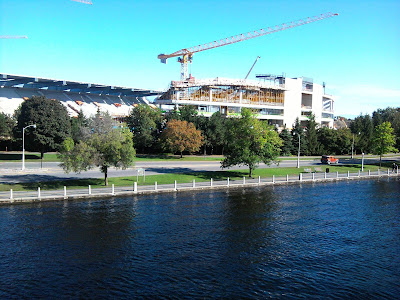