The Mackenzie King bridge is the second bridge crossing over the Rideau Canal in the heart of the city. Along the walkway, overlooking Confederation Park, is a relatively new memorial, commemorating the Korean War. We often pass over this war, so soon after the Second World War. Canada sent troops to that conflict, twenty six thousand in all, serving during the war and afterwards. Over five hundred Canadians died during the conflict, which to this day technically is still ongoing, as there was no peace treaty.

The memorial itself, admittedly, I don't care for. At least the top portion, the soldier and the children, who are all at life sized scale (which by a trick of the eye seems to actually diminish the size of the statue) It seems to render the soldier as babysitter. 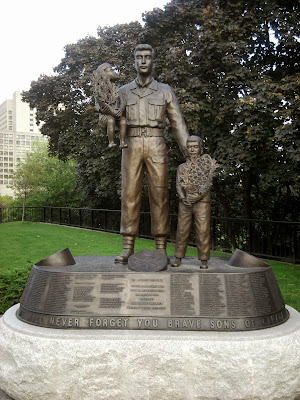 It's the base, however, which reminds you of the purpose of the memorial. The five hundred plus names of men who died in the Korean War and during UN peace duties afterwards are inscribed around the base. Many of them, of course, are enlisted men, their ranks very typical of the foot soldier: privates, sergeants, corporals. Young guys mostly, maybe some who'd gotten through the Second World War and stayed on, dying in a place far, far from home. 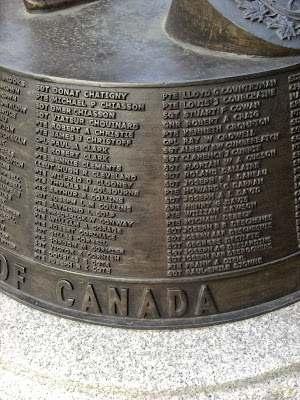 Tomorrow I'll start taking you down into Confederation Park, where there are a number of military monuments.